Join our Upper Mustang trek-12 days trek which offers a spectacular trekking into the remote Trans-Himalayan mountain area with Tibetan influence culture. The high desert region of the Tibetan influence, Kaligandaki, from the Tibetan border south to Kagbeni is generally referred to as Upper Mustang. Explore the thousand years of old monastery, caves, local tribes and scenic beauties of the different landscapes. Make an adventure starting from world’s deepest gorge Kaligandaki Region into world’s highest regions of Lo-Mangthang Valley that passes through an almost tree-less barren landscape, a steep rocky trail up and down hill and panoramic views of Nilgiri, Annapurna, Dhaulagiri and several other peaks. The trek passes through high peaks, passes, glaciers, and alpine valleys. The thousands years of isolation has kept the culture, lifestyle and heritage remain unchanged for centuries and to this date. The houses in Mustang are mostly made from stone and sun baked mud bricks. The city wall and the four storey palace in Lo-Manthang are some of the beautiful architectures of Mustang region. Another attraction in the Mustang region is the Tiji Festival influenced by Tibetan Buddhism, which is timed to coincide with the end of the dry season (late winter/spring). The Mustagi people have their own way of family life, which is quite surprising for many outsiders. All the brothers in the family are married to a single girl, what you may call a practice of polyandry.

The Transhimalayan Mustang Region is also known as the Last Forbidden Kingdom, since the region was restricted for outsiders until Nepal Government announced the opening of the restricted areas in October 1991. The Mustangis or the people of Mustang call themselves Lobas, and they have their own King or Tribe-leader, Jigme Palbar Bista. After Nepal was declared a republic in 2007, the Nepal Government took back the official recognition of the Bista as the Mustangi King. However, the people there still respect him as their King or tribe-leader. Bista also grants audience the visitor upon request. There is also strict control in obtaining a special permit from the department of immigration to protect their tradition from outside influence as well as to protect their environment. The Upper Mustang trek starts from Jomsom to Kagbeni, the entry point of upper Mustang Region. Follow the banks of Kaligandaki River upstream to get to Lo-Mangthang, the capital of the upper Mustang.

Our 12 days teahouse/lodge Upper Mustang trek is a great adventure trek for those who wish to make a challenging trek along “off the beaten path” in the Trans-Himalayan Region. If you are interested in making even more adventurous trek in remotest parts, we recommend you to try our Upper Dolpo & She Gompa Trek -28 days. For the trekkers longing to experience some of the most interesting features of the Annapurna region including Annapurna Base Camp, Machhapuchhre Base Camp, Poon Hill, etc, our Annapurna Sanctuary Trek-16 days itinerary would an interesting option.

Day 1 : pokhara to jomsom by flight then walk to kagbeni about 3 hours

Day 12 : back to pokhara by flight or drive about 7 hours 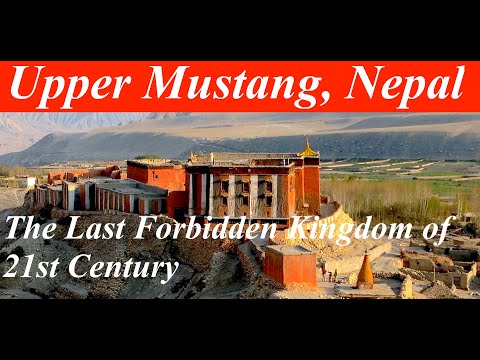 Cost Includes
Airport pick up and Drop by private car/van/bus.
Two nights standard accommodation in Kathmandu (on the arrival day and after the trekking).
Your standard meals (Breakfast, Lunch and Dinner) during the trekking.
All necessary paper works and conservation entry permits.
Ground transportation from Kathmandu to Bhulbhule by bus.
All accommodations in lodges/tea houses during the treks.
Trekkers Information Management System (TIMS) Permit.
An experienced, helpful and friendly Guide, porters (1 porter for 2 peoples).
Salary, Food, Drinks, Accommodation, Transportation and Insurance for the Guide and Porter.
Arrangement of Emergency Helicopter service which will be paid by your Travel insurance company.
Medical supplies (first aid kit will be available).
All government taxes.
Cost Does Not Include
International airfare and Nepal visa fee.
Excess baggage charges with domestic flight.
Lunch/dinner in Kathmandu.
Emergency rescue and medical expenses.
Personal expenses e.g. phone calls, laundry, bar bills personal porters.
Tips for the trekking crew.
Other optional trips/activities and sightseeing if required.